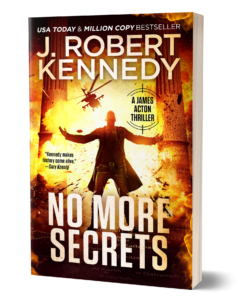 IN A WORLD OF SECRETS
SOME ARE MORE PAINFUL THAN OTHERS

In Sodom, Lot struggles against the sin that surrounds his family, losing the battle and fleeing on the advice of strangers he believes might be angels sent by God.

And thousands of years later, Archaeology Professor Laura Palmer loses her brilliant brother in a tragic accident while excavating the possible site of the lost biblical city.

Ten years after his death, a shocking secret is revealed that sends Laura and her husband, James Acton, in a search for the truth, a truth that still lies buried in the ruins of Sodom.

A truth that triggers a race for a secret her brother died to keep out of the hands of those who would abuse his final technological breakthrough.

In No More Secrets, award-winning USA Today and million-copy bestselling author J. Robert Kennedy delivers a shocking thriller that will have you on the edge of your seat as you burn through the pages. If you enjoy fast-paced adventures in the style of Dan Brown, Clive Cussler, and James Rollins, then you’ll love this thrilling tale of archaeological intrigue.

Get your copy of No More Secrets today, and see what secrets are worth killing for. And dying for…