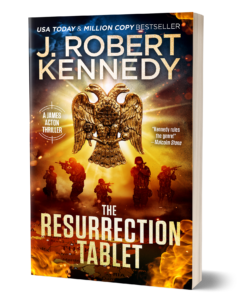 CHRIST WAS RESURRECTED AFTER DYING FOR OUR SINS.
OR WAS HE?

The Eastern Roman Empire is weak, its enemies threatening from all sides. The widowed Empress Eudokia, in a desperate attempt to save her empire for her young son to inherit, marries not for love, but duty. Yet who she chooses shocks the empire.

The new emperor sets out to secure the empire, and in the process, makes a discovery so shocking, it calls into question everything Christianity believes, but he dies before he can confirm what he has found.

A thousand years later, what he discovered is found once again, triggering a race to find the truth.

A truth that will rock Christianity forever.

In The Resurrection Tablet, award winning USA Today and million copy bestselling author J. Robert Kennedy delivers a history-twisting thriller that demands to be read in a single sitting. If you enjoy fast-paced adventures in the style of Dan Brown, Clive Cussler, and James Rollins, then you’ll love this thrilling tale of archaeological intrigue.

Get your copy of The Resurrection Tablet today, and discover the truth about what happened after Christ’s crucifixion…