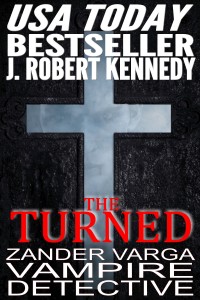 Zander has relived his wife’s death at the hands of vampires every day for almost three hundred years, his perfect memory a curse of becoming one of The Turned—infecting him their final heinous act after her murder.

Nineteen year-old Sydney Winter knows Zander’s secret, a secret preserved by the women in her family for four generations. But with her mother in a coma, she’s thrust into the front lines, ahead of her time, to fight side-by-side with Zander.

And she wouldn’t change a thing.

And she loves Zander.

But it’s a love that will have to go unrequited, because Zander has only one thing on his mind. And it’s been the same thing for over two hundred years.

But today, revenge will have to wait, because Zander Varga, Private Detective, has a new case. A woman’s husband is missing. The police aren’t interested. But Zander is. Something doesn’t smell right, and he’s determined to find out why.

From J. Robert Kennedy, the internationally bestselling author of The Protocol and Depraved Difference, comes his sixth novel, The Turned, a terrifying story that in true Kennedy fashion takes a completely new twist on the origin of vampires, tying it directly to a well-known moment in history. Told from the perspective of Zander Varga and his assistant, Sydney Winter, The Turned is loaded with action, humor, terror and a centuries long love that must eventually be let go.