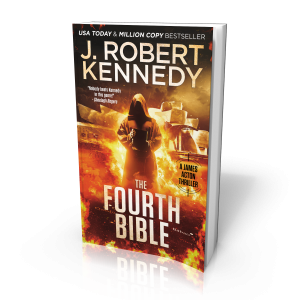 A VIOLENT REACTION TO A PRICELESS DISCOVERY KILLS SCORES.
AND THE WORLD BLAMES A FAMOUS ARCHAEOLOGICAL COUPLE.

In the 7th century, three Bibles were painstakingly created by Wearmouth-Jarrow Abbey monks. Over the years, one was destroyed, one remains today in tatters, and the third, still intact, became known as the Codex Amiatinus, the oldest surviving Latin Vulgate translation of the Bible.

A fourth Bible, unknown to history, has been discovered.

Invited to inspect the priceless find, Archaeology Professors James Acton and Laura Palmer head for the Guggenheim Museum Bilbao, and while there, eco-terrorists overrun the location. Under threat by the terrorist leader, the professors are forced to steal the ancient bible to save the hostages.

But something goes horribly wrong, and the hostages are killed.

Caught on video escaping moments before the bombs detonate, with the Bible in hand, the world believes the professors are to blame, and an international manhunt begins.

Now it is up to their friends to prove their innocence, and bring the true perpetrators to justice.

In The Fourth Bible, award winning and USA Today bestselling author J. Robert Kennedy once again mixes history with today’s headlines in a pulse-pounding international thriller sure to leave you sacrificing sleep to finish. If you enjoy fast-paced adventures in the style of Dan Brown, Clive Cussler, and James Rollins, then you’ll love this thrilling tale of archaeological intrigue.

Get your copy of The Fourth Bible today, and see what happens when fake news is used to fuel the outrage of those looking for an excuse to lash out at humanity…