The Templar Detective and the Lost Children (Book #7) 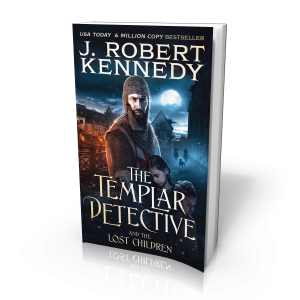 IT IS ONE OF THE KINGDOM’S GREATEST SHAMES.
BUT CAN ONE LONE TEMPLAR KNIGHT BRING IT TO AN END?

A desperate husband and father commits a heinous crime to protect his family’s future, then compounds it with an even more atrocious act to preserve his secret, forever condemning his soul to fiery damnation.

But the secret he thinks he has successfully protected is known to others, innocent and guilty alike.

And they are determined to take advantage, one to bring justice, the others to profit.

When Thomas Durant is told of the unspeakable horrors taking place on the streets of Paris, he asks his guests, Templar Knight Sir Marcus de Rancourt, and his trusted companion, Sergeant Simon Chastain, to help put an end to it.

They agree, and together, they vow to seek the truth and bring justice to those involved in both the King’s Court and the slums of Paris.

Get your copy today, and discover the terrible secret kept by the Kingdom of France’s noble families…