FAQ: Where did the idea for The Protocol come from?

How did you begin to marry archaeology, ancient history and civilizations with the great first Acton thriller story? 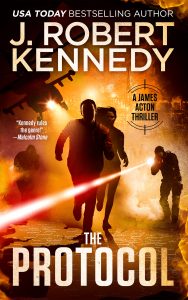 The idea for The Protocol initially came from a phone conversation I had with my best friend, Paul Conway. Paul has since succumbed to cancer, but we have him to thank for the kernel of the idea that led to my first novel.

Paul and I used to talk all the time, probably 30-60 minutes a day, five days a week. And we had jobs. Go figure. I had just had a short story published, and we were talking about my “budding” writing career, when he said something along the lines of, “Hey, I was watching TV last night and they were talking about these crystal skulls. Apparently there’s twelve of them. If you ever write a novel, you should write about that.”

How do I know that? I created a Word document, that I still have to this day, with a single line:

I saved the file (“Crystal Skull.doc”) and eventually got around to writing it. It went through quite a few iterations, then was accepted by the first publisher it was sent to. I bought the rights back years later, and now here we are, 34 novels (soon to be 35) and almost a million copies in.

But there’s a little more to the story. Just before I wrote the first draft of The Protocol, I read Dan Brown’s Deception Point. I thoroughly enjoyed it, and it heavily influenced the initial draft of the book. Bravo Team was modeled after his Delta team. They were brutal, efficient killers, more like automatons than the human beings my final version proved them to be. I showed the first draft to some friends, and while they liked the story, they didn’t all like the Delta guys. They had no names, no back-story, and might as well have been robots.

I rewrote the book, giving them all names and lives, and the book is far better for it, allowing these characters to develop over the course of 30 novels.

Thanks to my buddy Deniz Berkin for having the balls to tell me I needed to fix that aspect of the story. He did it politely, though. I don’t know if I would have been so kind.

This is why I try not to read other authors in my genre. It’s too easy to be influenced by them. When I read now, I’m mainly reading biographies or old staples like Agatha Christie or Sir Arthur Conan Doyle, though I do still read Dan Brown’s latest when it comes out. Fortunately, I’ve now developed my own style that I think is fairly set, so I probably wouldn’t be as influenced as I might have been years ago. That being said, I just don’t have the time to read that much anymore—I’m too busy writing!

So that’s the long-winded answer to where the idea of The Protocol came from. The crystal skulls were suggested by a buddy, and that obviously meant I needed an archaeologist. I needed a good enemy with unlimited resources, so enter the Delta Force, then I needed the twist, and that was the Triarii, something entirely of my own design (though the Triarii were a real part of Roman legions). I’m not sure what prompted me to write that first historical scene, but I do remember when I did, and it turned out to be one of the most popular aspects of the future novels. It, I hope, gives the best of both worlds—a bit of history mixed with modern day intrigue.

And there you have it, the story of how The Protocol began!