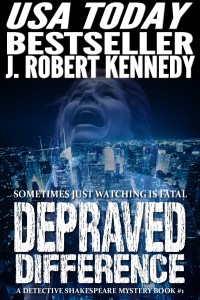 Would you help, would you run, or would you just watch?

When a young woman is brutally assaulted by two men on the subway, her cries for help fall on the deaf ears of onlookers too terrified to get involved, her misery ended with the crushing stomp of a steel-toed boot. A cell phone video of her vicious murder, callously released on the Internet, its popularity a testament to today’s depraved society, serves as a trigger, pulled a year later, for a killer.

Emailed a video documenting the final moments of a woman’s life, entertainment reporter Aynslee Kai, rather than ask why the killer chose her to tell the story, decides to capitalize on the opportunity to further her career. Assigned to the case is Hayden Eldridge, a detective left to learn the ropes by a disgraced partner, and as videos continue to follow victims, he discovers they were all witnesses to the vicious subway murder a year earlier, proving sometimes just watching is fatal.

From the author of The Protocol, Depraved Difference is a fast-paced murder suspense novel with enough laughs, heartbreak, terror and twists to keep you on the edge of your seat, then knock you flat on the floor with an ending so shocking, you’ll read it again just to pick up the clues.

Depraved Difference, the international bestseller from J. Robert Kennedy, now available in trade paperback, and eBook format on the Kindle and most other eReaders.