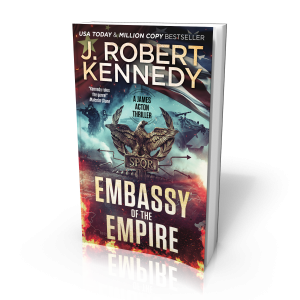 AN INCIDENT ON THE HIGH SEAS RISKS WAR BETWEEN THE USA AND CHINA.
AND AN INNOCENT ARCHAEOLOGICAL TEAM IS CAUGHT IN THE MIDDLE.

Almost two-thousand years ago, the Roman Empire established its first embassy in Han China, and something went horribly wrong, the mission now a mere footnote in history.

And today, in London, a shocking discovery is made that may be linked to those unfortunate events, and the proof could lie in the ancient capital of the Han Empire.

In a hunt for the truth, Archaeology Professors James Acton and Laura Palmer travel to China to investigate a stunning discovery—the ruins of the doomed Roman Embassy. As they arrive, a terrifying incident between two of the world’s most powerful militaries unfolds, sending not only the globe into a panic, but an innocent team of archaeologists fleeing for their lives.

It is a race against time to find safe-harbor before war is declared, and the innocent become pawns in what could devolve into World War Three.