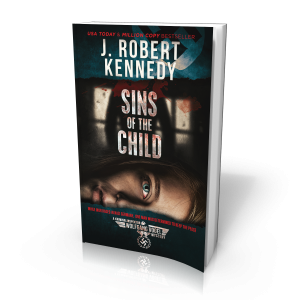 What would you do if justice meant
tearing apart your own family?

IN NAZI GERMANY, IT WASN’T JUST WHO YOU KNEW. IT WAS WHO YOU MARRIED.

In 1941 Nazi Berlin, the body of a 19-year-old woman is found brutally murdered, with clues suggesting there might be an accomplice, or a witness, to the horrific act.

Assigned the case, Kriminalinspektor Wolfgang Vogel and his young, unqualified zealot of a partner begin their investigation with little to go on, eventually identifying the victim as the daughter of a Nazi Party official, determined to marry her off to a wealthy family to secure his own future.

But she had a future of her own in mind that conflicted with her parents’ plans for her, and it is up to Vogel to determine if that, or some other depraved motive, is responsible for her gruesome murder.

Sins of the Child, the latest from award winning USA Today and million copy bestselling author J. Robert Kennedy, will have you awake into the late hours as you puzzle out this thrilling mystery set against the backdrop of World War Two Nazi Germany, where life went on much as it did in cosmopolitan America, with crime continuing unabated, and police struggling as they always have to maintain the peace.

Get your copy of Sins of the Child today, and decide if you would destroy your own family to see justice served…