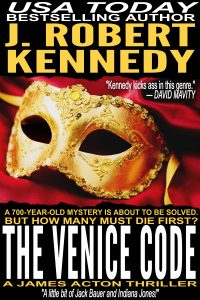 A 700-YEAR-OLD MYSTERY IS ABOUT TO BE SOLVED.
BUT HOW MANY MUST DIE FIRST?

A former President’s son is kidnapped in a brazen attack on the streets of Potomac by the same ancient organization that murdered his father, convinced he knows the location of an item stolen from them by the late President.

A close friend awakens from a coma with a message for Archaeology Professor James Acton from the same organization, sending him along with his fiancée on a quest to find an object only rumored to exist, while trying desperately to keep one step ahead of a foe hell-bent on possessing it.

And 700 years ago, the Mongol Empire threatens to fracture into civil war as the northern capital devolves into idol worship, the Khan sending in a trusted family to save the empire—two brothers and a son, Marco Polo, whose actions have ramifications that resonate to this day.

Get The Venice Code now, and join an adventure 700 years in the making!

Purchase The Venice Code at these stores: