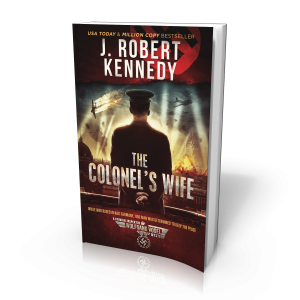 What would you do if solving a murder meant the certain death of an innocent?

WHILE WAR RAGED IN NAZI GERMANY, ONE MAN WAS DETERMINED TO KEEP THE PEACE.

Berlin. 1941. Nazi Germany controls most of Europe, and the war has barely touched the German capital. Life goes on, with most civilians optimistic about the future. Bakers baked. Fishermen fished. Cleaners cleaned.

When a body is found after an air raid, it is treated as routine until an anonymous tip has the case assigned to Kriminalinspektor Wolfgang Vogel, who discovers the death was anything but a casualty of war.

A murder beyond the routine, with a motive so shocking, it will leave Vogel questioning his own morality, and whether his oath to uphold the law is absolute, no matter what the cost.

The Colonel’s Wife, the first in a new series from award winning USA Today and million copy bestselling author J. Robert Kennedy, will have you lost in the mysteriousness of World War Two Nazi Germany, where life went on much as it did in cosmopolitan America, where crime continued unabated, and where police struggled as they always have to maintain the peace.

Get your copy of The Colonel’s Wife today, then decide what you would have done had you been thrust into the same situation as Kriminalinspektor Wolfgang Vogel…