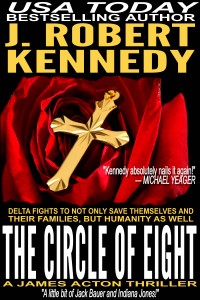 ABANDONED BY THEIR GOVERNMENT, DELTA TEAM BRAVO FIGHTS TO NOT ONLY SAVE THEMSELVES AND THEIR FAMILIES, BUT HUMANITY AS WELL.

The Bravo Team is targeted by a madman after one of their own intervenes in a rape. Little do they know this internationally well-respected banker is also a senior member of an organization long thought extinct, whose stated goals for a reshaped world are not only terrifying, but with today’s globalization, totally achievable.

As the Bravo Team fights for its very survival, they are suspended, left adrift without their support network. To save themselves and their families, markers are called in, former members volunteer their time, favors are asked for past services, and the expertise of two professors, James Acton and his fiancée Laura Palmer, is requested.

It is a race around the globe to save what remains of the Bravo Team, abandoned by their government, alone in their mission, with only their friends to rely upon, as an organization over six centuries old works in the background to destroy them and all who help them, as it moves forward with plans that could see the world population
decimated in an attempt to recreate Eden.

The Circle of Eight is the seventh installment in the internationally bestselling James Acton Thrillers series. In The Circle of Eight J. Robert Kennedy, author of over a dozen international bestsellers, is at his best, weaving a tale spanning centuries and delivering a taut thriller that will keep you on the edge of your seat from page one until the breathtaking conclusion.

The Circle of Eight, the latest novel from J. Robert Kennedy, now available in print and eBook format wherever books are sold.