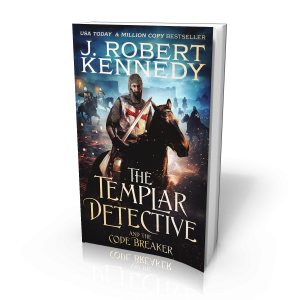 THE TEMPLAR CODE HAS BEEN BROKEN,
RISKING THE VERY FUTURE OF THE ORDER.
NOW IT’S A RACE AGAINST TIME TO UNCOVER THOSE RESPONSIBLE.

An awkward young man uniquely adept at recognizing patterns has broken the Templar’s secret code used to securely transfer wealth across Europe and the Holy Lands.

His only motivation is to help his family and those in need, yet when he forges Letters of Credit to transfer small amounts from the wealthy Templars to his struggling neighbors, his noble plan is discovered and twisted into something far more sinister.

A plot to destroy the Templars once and for all.

And when an old friend arrives on their humble farm to investigate the forgeries, Sir Marcus de Rancourt and his men are drawn into a conspiracy that if not stopped, could change the power structure of Europe for centuries to come, and destroy the Knights Templar without a single blade drawn.

Get your copy today, and join the struggle to save the greatest order of knights to ever walk the face of the earth…