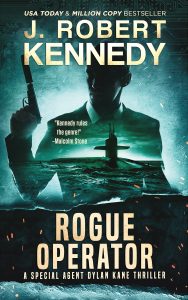 IN ORDER TO SAVE THE COUNTRY HE LOVES, DYLAN KANE MUST FIRST BETRAY IT

Three top secret research scientists are presumed dead in a boating accident, but the kidnapping of their families the same day raises questions the FBI and local police can’t answer, leaving them waiting for a ransom demand that will never come.

Central Intelligence Agency Analyst Chris Leroux stumbles upon the story, and finds a phone conversation that was never supposed to happen. When he reports it to his boss, the National Clandestine Services Chief, he is uncharacteristically reprimanded for conducting an unauthorized investigation and told to leave it to the FBI.

For he knows something the FBI doesn’t.

One of the scientists is alive.

Chris makes a call to his childhood friend, CIA Special Agent Dylan Kane, leading to a race across the globe to stop a conspiracy reaching the highest levels of political and corporate America, that if not stopped, could lead to war with an enemy armed with a weapon far worse than anything in the American arsenal, with the potential to not only destroy the world, but consume it.

J. Robert Kennedy, the author of nine international bestsellers, including the smash hit James Acton Thrillers, introduces Rogue Operator, the first installment of his newest series, The Special Agent Dylan Kane Thrillers, promising to bring all of the action and intrigue of the James Acton Thrillers with a hero who lives below the radar, waiting for his country to call when it most desperately needs him.

Rogue Operator, the latest novel from J. Robert Kennedy, now available in print and eBook format wherever books are sold.