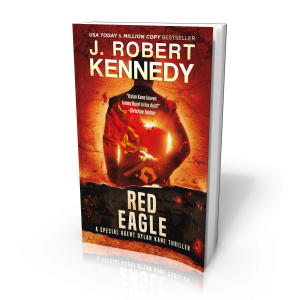 THEY TOOK HIS FRIEND.
THAT WAS THEIR FIRST MISTAKE.

When CIA Special Agent Dylan Kane’s handler is kidnapped in a brazen attack, his team leaps into action to track down those behind the abduction.

And they have only one clue.

Her final words, shouted as she was taken, and whispered by their boss as he lay dying.

However, the moment they begin the investigation, armed guards arrive at the operations center deep in the heart of CIA Headquarters at Langley, locking them down.

And the reason for the lockdown is not only shocking, but the implications terrifying, sending Kane on a desperate mission to not only rescue his handler and friend, but to prevent the knowledge she possesses that in the wrong hands could start World War III.

In Red Eagle, award winning USA Today and million copy bestselling author J. Robert Kennedy once again blends history and today’s headlines to deliver a pulse-pounding action packed thriller, where the stakes have never been higher, and failure is not an option. If you enjoy Bond, Bourne, and Hunt, then you’ll love Dylan Kane.

Get your copy of Red Eagle now, and join the race to recover a CIA asset lost since the Cold War, with intel that could destroy the world…