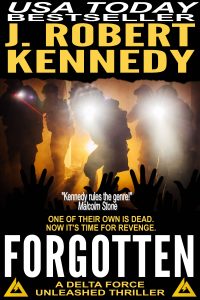 ONE OF THEIR OWN IS DEAD.
NOW IT’S TIME FOR REVENGE.

On a mission to rescue a young American woman held by ISIS as a sex slave, one of the Delta Force’s Bravo Team is killed, betrayed by a mole within the Unit. As the team reels from the loss, the CIA presses hard to find the young woman and give the team a second chance to fulfill their mission.

And seek revenge for the death of their comrade.

Torn from today’s headlines, USA Today bestselling author J. Robert Kennedy’s Forgotten confronts one of the greatest tragedies of our time—the massive, systematic rape of thousands of innocent young girls, and the misguided American women desperate to join the perpetrators. A non-stop action-packed thrill ride, Forgotten is filled with humor, tragedy, romance and hope, with an intensity only Kennedy can deliver.