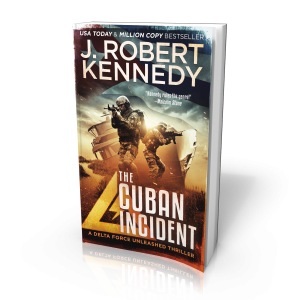 THEY THOUGHT WE WOULDN’T DARE.
THEY NEVER COUNTED ON DELTA.

An engine failure during a hurricane causes an American yacht to wash up on the shores of Cuba, triggering an international incident.

For this is no ordinary ship.

It is a testing platform for cutting edge electronic surveillance equipment.

By the time the lost ship is located, it is too late—the Cubans have already found it, claiming there were no survivors, and that the brave crew had carried out their final orders, destroying all the equipment before they were lost at sea.

But the US government can’t risk trusting the Cubans, so Bravo Team, members of the elite Delta Force, are sent in to make certain the equipment has been destroyed before it can be sold to America’s enemies by a Communist regime desperate for foreign capital.

The stakes have never been higher, and failure is not an option. If the experimental technology falls into the wrong hands, it could compromise America’s security for years, and give its enemies the upper hand.

In The Cuban Incident, award winning USA Today and million copy bestselling author J. Robert Kennedy once again delivers an action-packed pulse-pounding international thriller, sure to leave you burning through the pages into the late hours. If you thrive on big action, then you’ll love it when America unleashes the Delta Force on its enemies.

Get your copy of The Cuban Incident now, and see what happens when America once again asks its heroes to protect its interests against overwhelming odds…