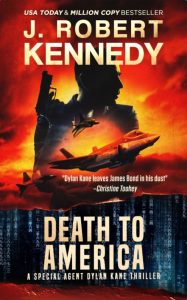 WHO DO YOU TRUST WHEN YOUR COUNTRY TURNS AGAINST ITSELF?

America is in crisis. Dozens of terrorist attacks have killed or injured thousands, and worse, every single attack appears to have been committed by an American citizen in the name of Islam.

A stolen experimental F-35 Lightning II is discovered by CIA Special Agent Dylan Kane in China, delivered by an American soldier reported dead years ago in exchange for a chilling promise.

Chinese Special Forces Officer Lee Fang overhears a conversation that sends her running for her life with information about a threat to America so great, it might be powerless to stop it.

And Chris Leroux is forced to watch as his girlfriend, Sherrie White, is tortured on camera, under orders to not interfere, her continued suffering providing intel too valuable to sacrifice.

From internationally bestselling author J. Robert Kennedy comes a disturbing action thriller that will have readers on the edge of their seat as they try to unravel the truth along with Kane, Leroux and Delta Team-Bravo as they question their own beliefs, their own government, and their own country.

Death to America, the latest novel from J. Robert Kennedy, now available in print and eBook format wherever books are sold.