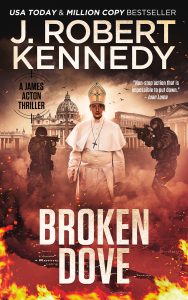 WILL A SECRET HIDDEN BY THE CATHOLIC CHURCH FOR OVER A THOUSAND YEARS FINALLY BE REVEALED?

When the new Pope, a member of an ancient organization descendant from the Roman Empire, assumes control of the Roman Catholic Church, an organization founded by Saint Peter himself takes action, murdering one of the new Pope’s operatives. Detective Chaney, called in by the Pope to investigate, disappears, and, to the horror of the Papal staff sent to inform His Holiness, they find him missing too, the only clue a secret chest presented to each new Pope on the eve of their election, since the beginning of the Church.

Interpol Agent Reading, determined to find his friend, calls Professors James Acton and Laura Palmer to Rome to examine the chest and its forbidden contents, but before they can arrive, they are intercepted by an organization older than the Church, demanding the professors retrieve an item stolen in ancient Judea in exchange for the lives of their friends.

All of your favorite characters from The Protocol return to solve the most infamous kidnapping in history, against the backdrop of a two thousand year old battle pitting ancient foes with diametrically opposed agendas.

From the internationally bestselling author of Depraved Difference and The Protocol comes Broken Dove, the third entry in the smash hit James Acton Thrillers series, where J. Robert Kennedy reveals a secret concealed by the Church for almost 1200 years, and a fascinating interpretation of what the real reason behind the denials might be.